Not too terribly long ago, I asked people on Facebook to share a scripture of their choice, and a date to go with it so I could fill my calendar with verses from friends. It’s an idea I stole from someone who’d stolen it from someone else, and others have since stolen it from me— so you know it’s a good idea— and I recommend you steal it, too. One of the scriptures I received for February was Galatians 4:29. It’s not one of your typical meme-able verses, but I can see its appeal. “But as at that time he who was born according to the flesh persecuted him who was born according to the Spirit, so it is now also” (NASB, here and throughout). Standing alone, it sounds like the verse is telling us that whenwe’re persecuted, it’s because those persecuting us aren’t of the Spirit; they’re of the world (cf. John 15:20). In its context, the appeal is even deeper.

Galatians is a book written by the apostle Paul to the churches in the region of Galatia, in modern-day Turkey. In Galatians 1:6, we see some of Paul’s frustration: “I am amazed that you are so quickly deserting Him who called you by the grace of Christ, for a different gospel.” Whereas in his other letters, Paul heaps praise and prayers at the beginning, here he cuts to the chase immediately. As we read through the book, we learn that the Christians in Galatia are being drawn into a sort of Jewish version of Christianity, which requires obedience to the Law for salvation. Paul defends what he has taught them, explaining that it came directly from Jesus Christ (Galatians 1:11), and relating his history, both personally and in his ministry. Throughout the book, circumcision is used as an example of works of the Old Law, and serves as a synecdoche, standing for all works of the Law.

He tells of an encounter with the apostle Peter, who was fearing the party of the circumcision (Galatians 2:12), and relates some of what he said, “… I do not nullify the grace of God, for if righteousness comes through the Law, then Christ died needlessly” (Galatians 2:21). In other words, if we could be saved by performing the works of the Law as given in the Old Testament, we wouldn’t have needed a savior at all. Next, Paul lands the hammer: “You foolish Galatians…” The word for “foolish” here means “unintelligent, foolish, dull-witted” (Arndt 84). As you might imagine, it isn’t a common word in the New Testament— it’s rather a strong one— yet Paul uses it twice in just a few verses. Paul continues, “Are you so foolish? Having begun by the Spirit, are you now being perfected by the flesh?” (Galatians 3:3). As he goes on, he sets God’s promises— given to Abraham— against the Law. He explains that the promises enable our inheritance, not the Law, and that the Law was only meant to be temporary. “But before faith came, we were kept in custody under the Law, being shut up to the faith which was later to be revealed. Therefore the Law has become our tutor to lead us to Christ, so that we may be justified by faith” (Galatians 3:23, 24). The chapter closes with, “And if you belong to Christ, then you are Abraham’s descendants, heirs according to promise” (Galatians 3:29). Chapter four rounds back to the problem Paul wishes to address. Essentially, those held under tutors and managers are those who are children, and a child is not much different from a slave, Paul says (Galatians 4:1). The Jews were held under the Law, and Gentiles were slaves to idols (Galatians 4:5, 8). We can almost see Paul shaking his head in dismay as he wonders, “…how is it that you turn back again to the weak and worthless elemental things to which you desire to be enslaved all over again?” (Galatians 4:9). After reminding them of the early days when they first met Paul, tenderly calling them his children, he asks them to consider the law, and more of the story of Abraham.

The account Paul relates is found in Genesis 16, and 21. Abraham fathered children by two women. One was a handmaid— Hagar— the other a free woman— Sarah. Hagar’s child was conceived out of Sarah’s scheme. It was a scheme that lacked faith on her part; she seems to have disbelieved that God would use her to fulfill His promise. Sarah’s child, on the other hand, was born from God’s promise. The Holy Spirit, through Paul, tells us that this is really an allegory. Hagar represents Mount Sinai, where Moses received the Law, and the earthly Jerusalem, where all Temple worship was done. Sarah, in her freedom, represents the Jerusalem above, and she, not the enslaved Hagar, is our mother. We are children of the promise, and free. And here is the context of our verse. “But at that time he who was born according to the flesh persecuted him who was born according to the Spirit, so it is now also.” Ishmael, son of Hagar and the fleshly scheme by which he was conceived, mocked Isaac (Genesis 21:9). Those who are enticing the Galatians to works of the Law are just as Ishmael was: of the flesh. And again the hammer lands, “… the son of the bondwoman shall not be an heir with the son of the free woman” (Galatians 4:30).

Paul sums up the message of the allegory in 5:1, “It was for freedom that Christ set us free; therefore keep standing firm and do not be subject again to a yoke of slavery” (Galatians 5:1). The crux of the problem, the issue with adopting a works-for-salvation gospel (“which is not r

eally another [gospel]” since it is not good news [Galatians 1:7]), is that receiving it causes Christ to be of no benefit (Galatians 5:2). The one who attempts this sort of salvation must keep the entire Old Law, a feat proved impossible over and over from the time of Moses to the time of Christ (Galatians 5:3). This whole section is hammer blow after hammer blow to the idea of salvation by works.

From Galatians 5:13 and on, God, through Paul, tells them how they truly should be living. Want to fulfill the Law? Then, the short answer is this: Love your neighbor as yourself (Galatians 5:14). Live by the Spirit and allow it to produce its fruits (Galatians 5:22-25). Keep on doing good, and don’t grow weary (Galatians 6:9). Be humble and remember that the only cause for boasting is that we are saved through Christ (Galatians 6:14). Doing the things of the Law, or not— it really doesn’t matter. What matters is that you are a new creation in Christ; that is how one is part of God’s Israel today (Galatians 6:15, 16).

What does it all mean for us today? Since the Temple no longer stands in Jerusalem, and the Levitical priesthood isn’t extant either, I’m willing to bet you aren’t being tempted toward Old Testament Judaism. So… what do we take from this? While we don’t face exactly the same

circumstances, we do have a tendency to rely on our own goodness, and to elevate our customs to requirements. Now, don’t shoot the messenger here, but Wednesday night Bible class is a tradition, not a requirement. Many elders have decided that it is an opportunity they want those in their charge to have, but even they cannot bind what God Himself has not bound. Nevertheless, we have a tendency to count out people who aren’t in the habit of attending Wednesday night class, and judge them as less spiritual. There are a lot of good reasons to make Wednesday night services a priority, but we have to be careful about binding that on others. Work days, ladies’ classes, ladies’ days, teaching Bible classes— these are all good things, but they are not requirements, and we need to remember that. I don’t think that’s our most toe-stepping application, though.

How about good works? Titus tells us that we are to be zealous for good deeds (Titus 2:14). We are told in James that faith without works is dead (James 2:26). We know that he isn’t talking about works of the Law, but about works driven by love for God and His people. BUT— this is a big one, y’all— those deeds don’t earn us anything. If your works are done as an effort to impress God or man, as an attempt to repay the debt of your sins, beware: you may be “deserting Him who called you by the grace of Christ for a different gospel” (Galatians 1:6, emphasis added). When you’re

doing good (as in doing good), and being good, and living rightly, you aren’t earning salvation, or even bragging rights. All those good, righteous deeds are like filthy rags (Isaiah 64:6). Good people don’t go to Heaven; saved people go to Heaven. Instead, it is as Jesus said, “We are unworthy slaves; we have done only that which we ought to have done.” (Luke 17:10). Do good. By all means, do good, and do not grow weary in doing good (Galatians 6:9), but remember that salvation is through no other name, and by no other way than Jesus Christ (Acts 4:12; John 14:6). 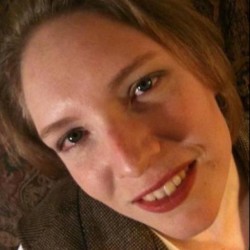 Erynn Sprouse
Erynn is the author of Perfected (A Study of Hebrews). She and her husband, Jeremy serve with the Patrick Street church of Christ in Dublin, TX . Her husband is the pulpit minister and evangelist. Erynn is a stay at home, homeschooling mom to their six children: five young knights-in-training and one sweet princess. They are 2003 graduates of the Bear Valley Bible Institute of Denver. Erynn is the creator and a regular contributor form Come Fill Your Cup.

Erynn is the author of Perfected (A Study of Hebrews). She and her husband, Jeremy serve with the Patrick Street church of Christ in Dublin, TX . Her husband is the pulpit minister and evangelist. Erynn is a stay at home, homeschooling mom to their six children: five young knights-in-training and one sweet princess. They are 2003 graduates of the Bear Valley Bible Institute of Denver. Erynn is the creator and a regular contributor form Come Fill Your Cup.